Summer Pruning at Elizabeth Park: How to Train Your Rambler

The fireworks are spent, the 4th of July lawn games are packed away in the attic. Here at Elizabeth Park the dog days mean rambler pruning.

In my last post I wrote about the Park’s famous arched trellises. Every July, soon after their blossoms fade, we train climbing roses to span the arches, encouraging new growth for the following season’s bloom. Some years “training” just means tying new canes in an upward direction. Other years–approximately one in three–ramblers benefit from a “hard” prune. Removing excess growth, deadwood, and less productive canes reinvigorates the plant, and the resulting increased airflow wards off spider mites, black spot, and other common rose ailments (Scanniello, 2006, “July”). What follows is a step-by-step guide to hard pruning ramblers on the Elizabeth Park arches as taught to yours truly by the Park’s head rosarian, Stephen Scanniello.

Step 1: SHAVE AND A HAIRCUT

Remove spent blossoms and any visible deadwood or unproductive canes. Bear in mind this isn’t precision deadheading: the “haircut” is an opportunity to quickly remove obvious clutter, making it easier to untangle the canes when you prune them later on. I use a pair of sharp scissors for deadheading and cutting back tender canes, pruners for removing deadwood and woody growth. 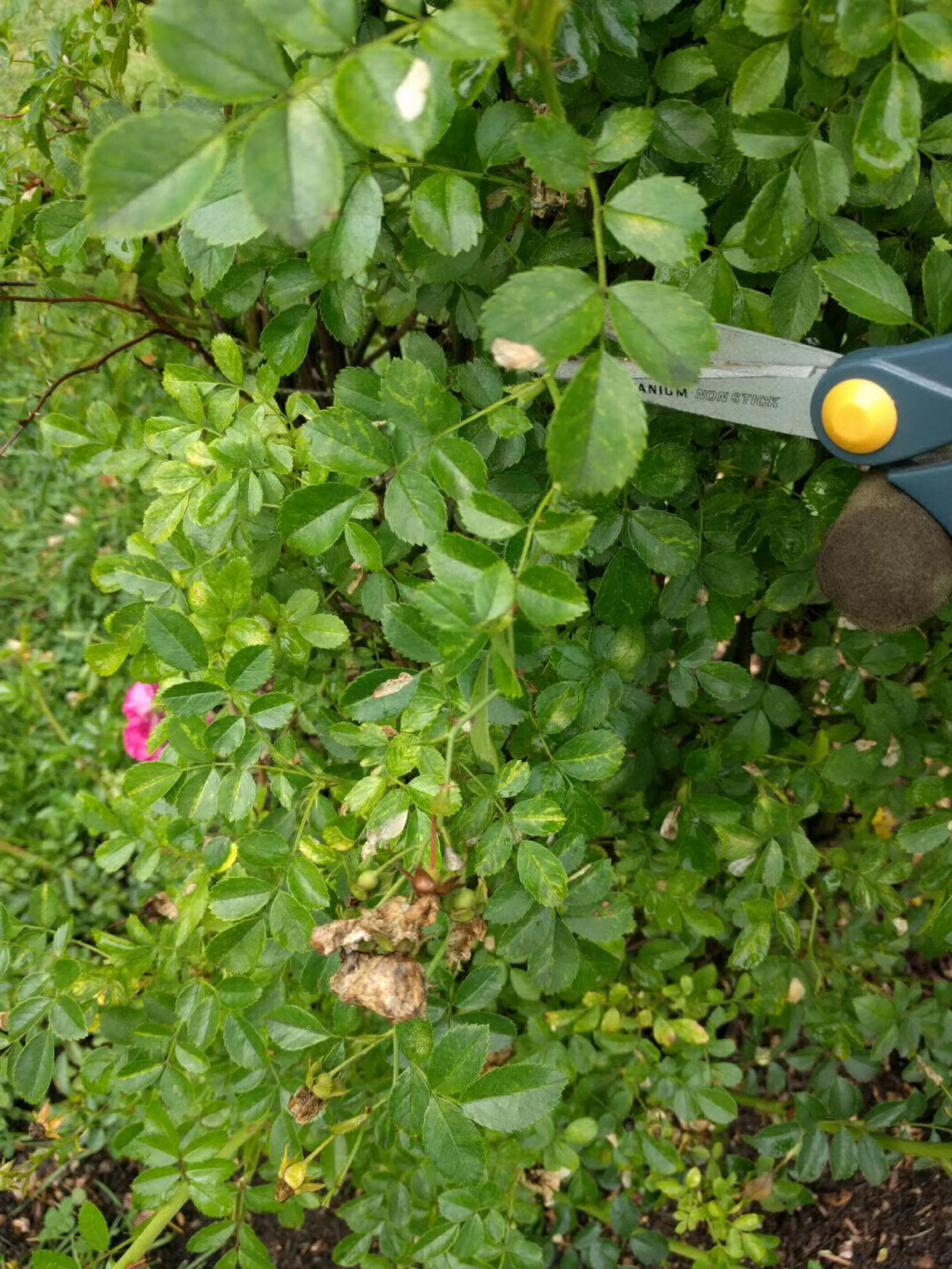 Cut off any fasteners holding the plant to the arch. At Elizabeth Park we use jute twine. You’ll need a ladder to reach the higher spots. We use free-standing orchard ladders at the Park. 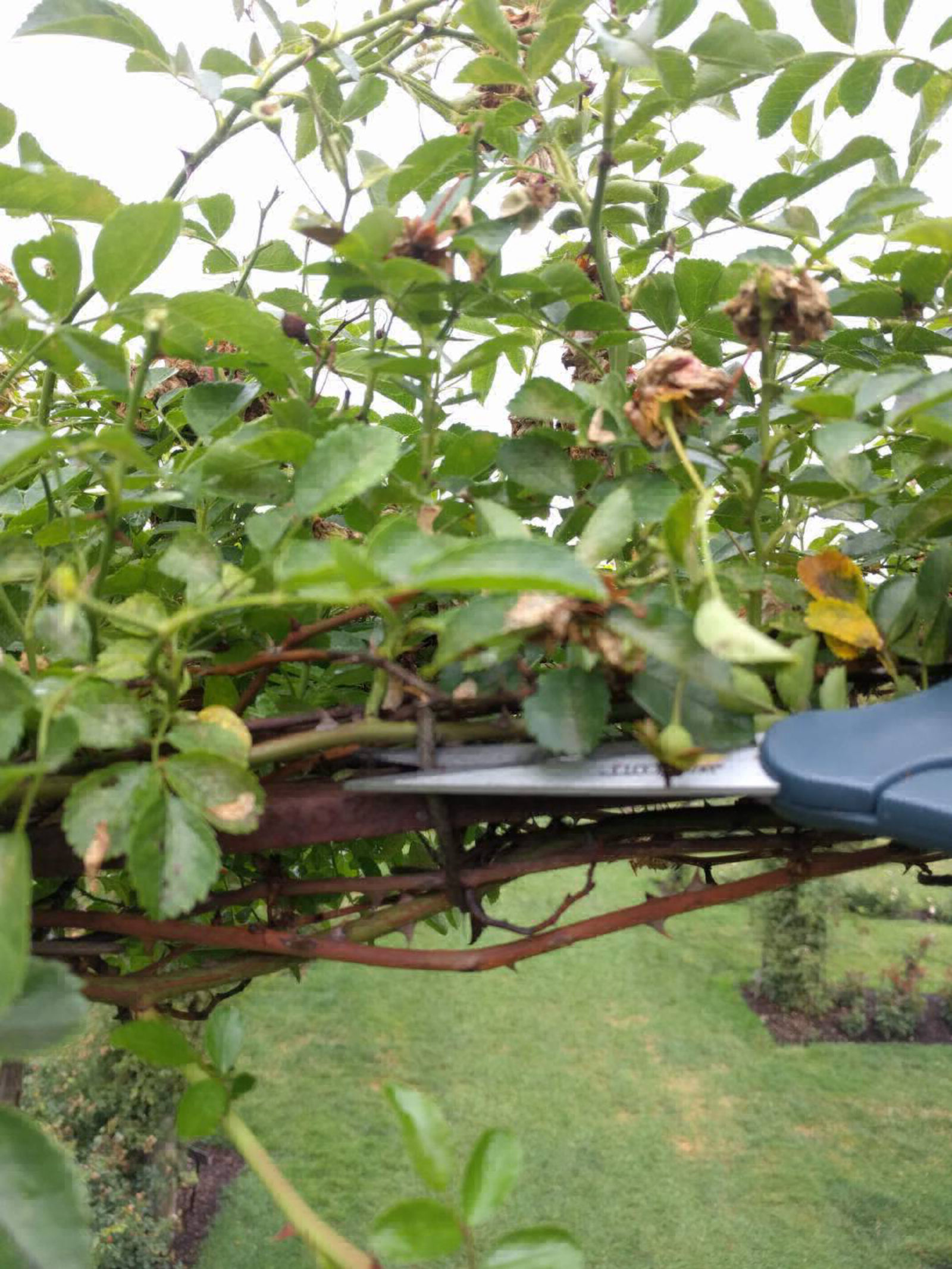 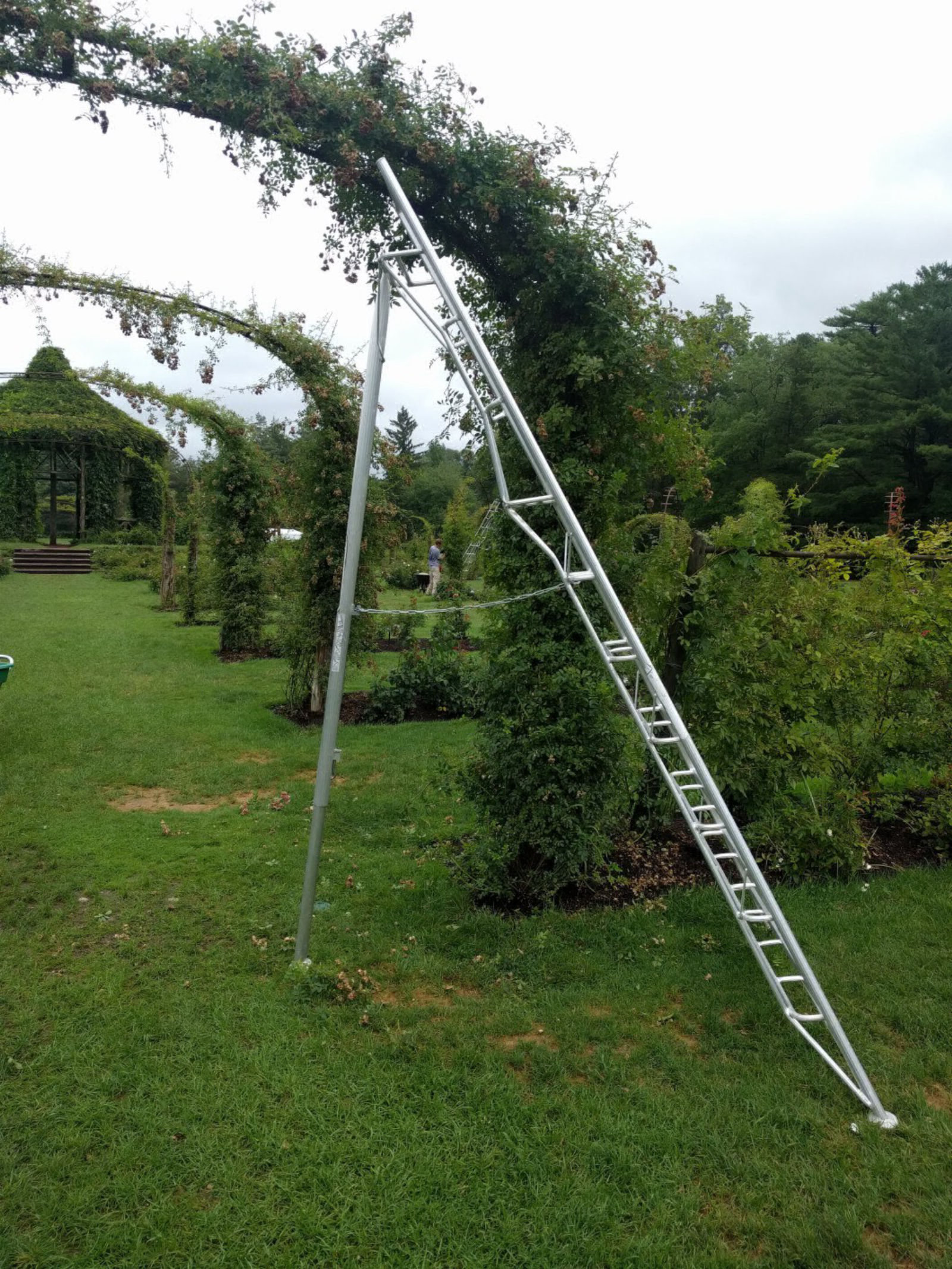 Once you’ve removed the fasteners you can start slowly pulling the canes off the arch. Most likely they will be completely tangled (and sharp!) so take your time. I start at the top and work my way down, pruning as I go, removing deadwood and excess growth.

Various stages of removing a rambler from the arch

Once the plant is off the arch it’s time for heavy pruning. Remove any remaining deadwood, unproductive canes (i.e. canes that lack new growth), and canes that are shorter than an arm’s length. As for lateral growth (small shoots growing off the sides of main canes), I tend to remove some completely while leaving a few inches on other stems to preserve foliage and encourage future blooms. 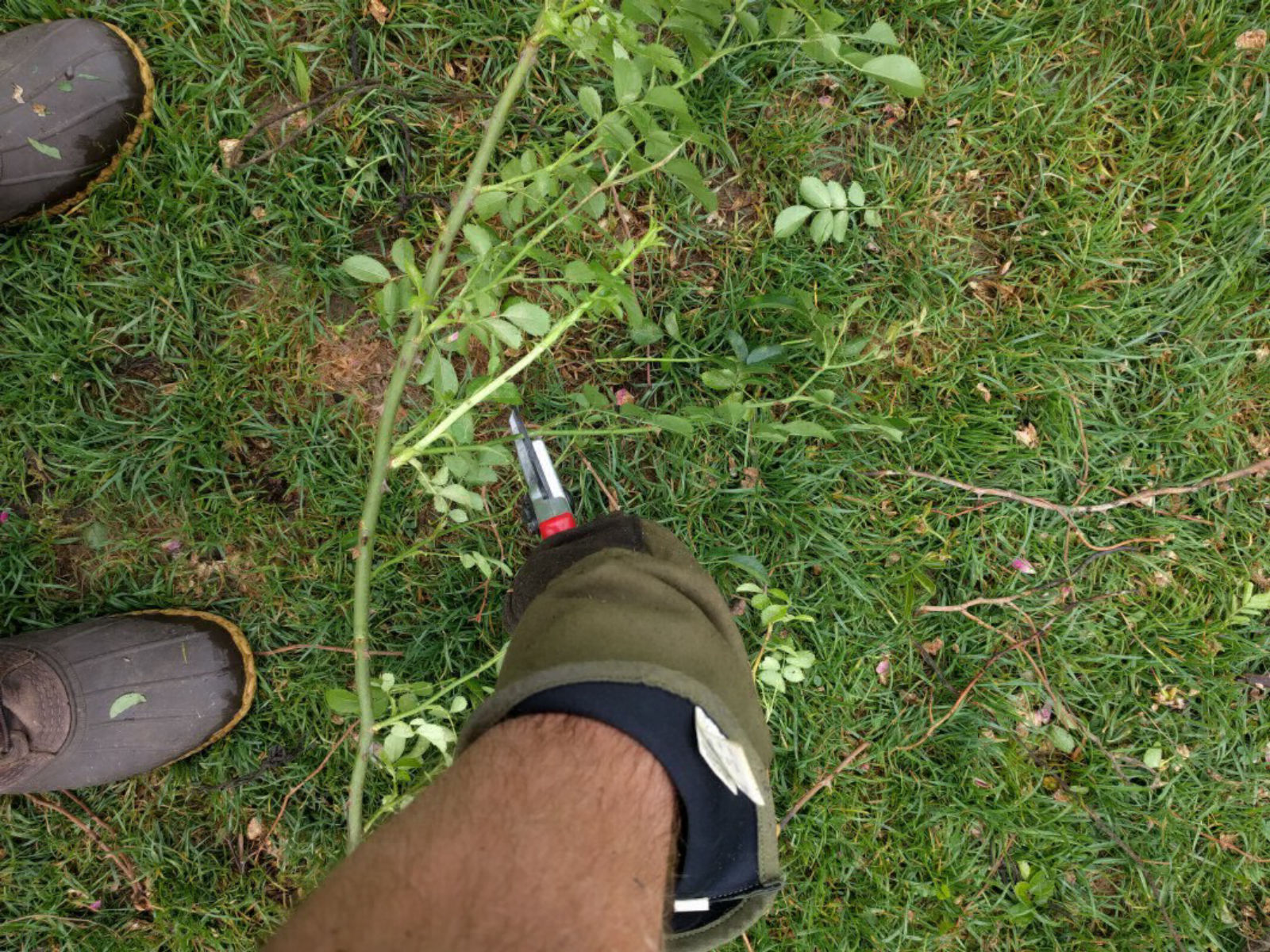 Cutting back lateral growth to a few inches

As you clear the clutter you’ll start to be able to identify which canes to save for retying to the arch. Ideally you want to keep any that are longer than 6 feet and/or bear promising new growth.  Remember, this year’s new growth produces next year’s most abundant blossoms on most once-blooming ramblers (Scanniello, 2006, “July”). There’s no “right” number of canes to save; just keep whatever is required to cover the structure. For the Elizabeth Park arches I tend to save 6-10 canes after a hard prune. 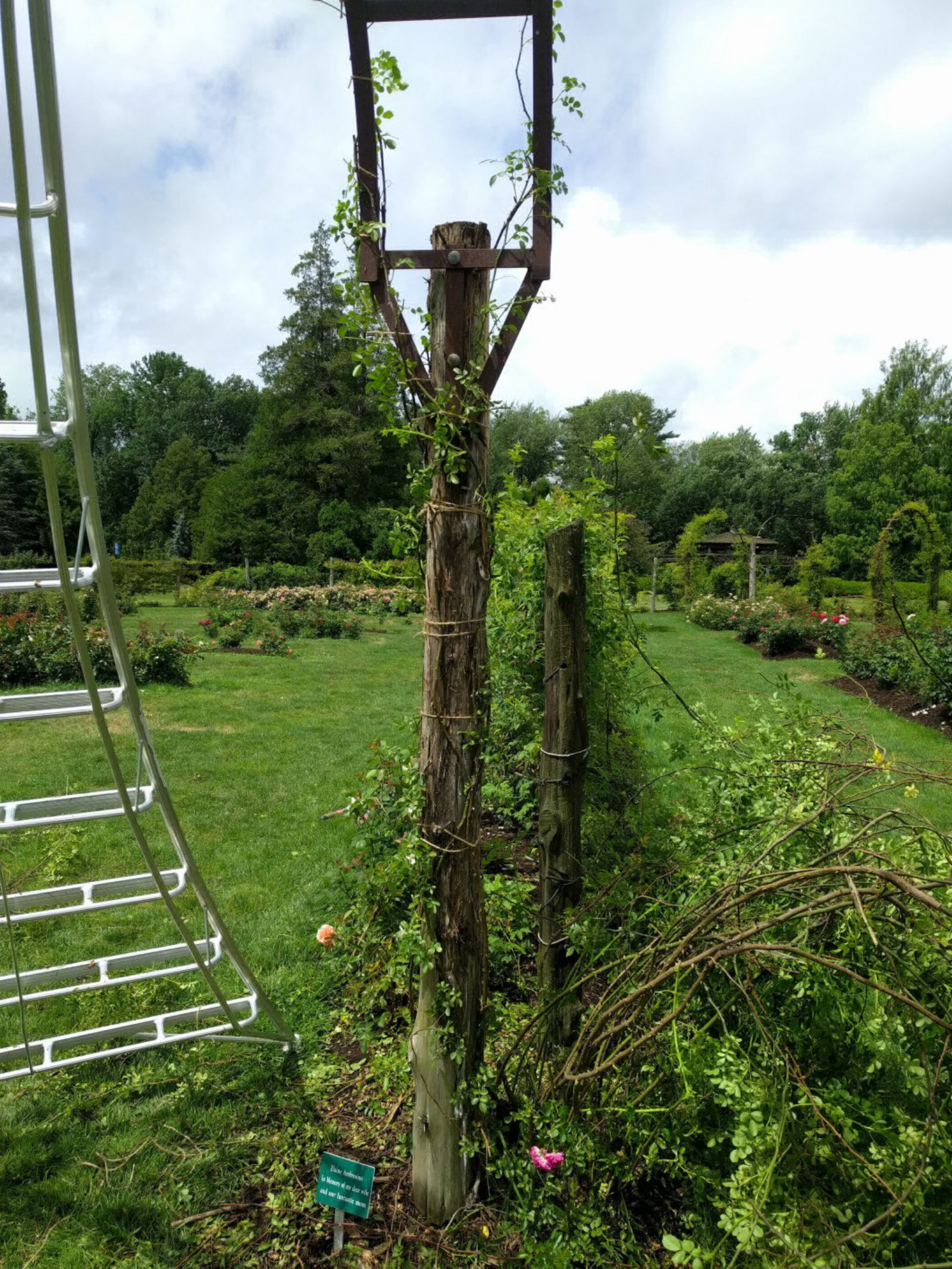 As you re-tie the canes, spiral them around the column in order to evenly cover the surface of the arch. The end result should look something like the images below. Hard pruning arches takes time, so allow yourself a full day’s work to train one arch (two plants–one for each column). 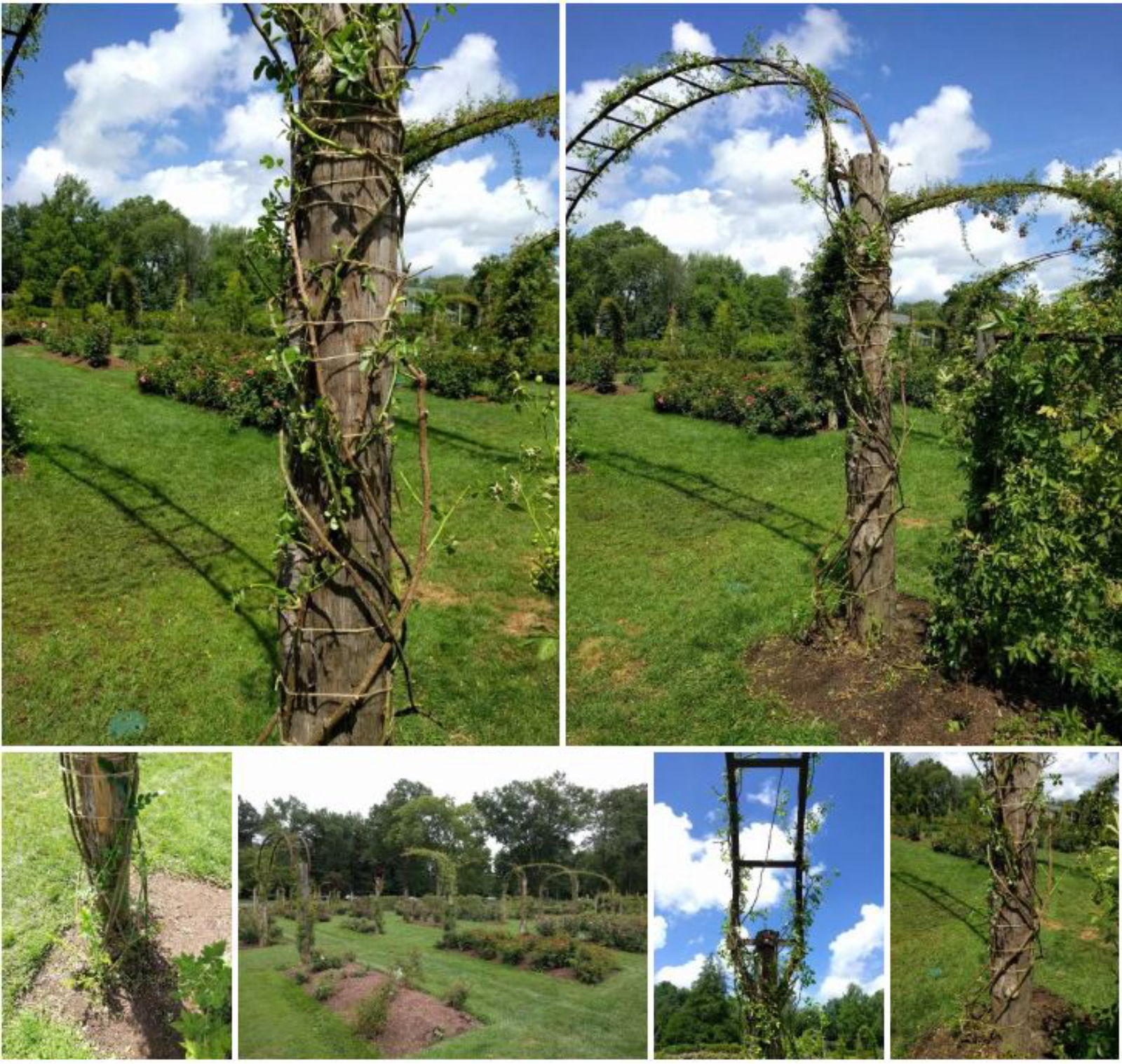